In the past few weeks, crowdfunding has become a hot topic once again thanks to the success of the Veronica Mars Kickstarter campaign. It’s been a hotly debated subject – is crowdfunding now dead to indie creators as it’ll start to be taken over by bigger studios who want to get a bit of extra money in their pockets? Or is it just the beginning of something even bigger? Who knows? But I think that every single person who is planning to or is running a crowdfunding campaign can learn so much from the way this campaign has been run and some of the reasons it’s been so phenomenally successful.

Sure, Veronica Mars was on TV, with a pretty strong and devoted fan following in the years it was on. But they maintained the fanbase since the show has been off the air and when they put out the call to arms, the fans answered. And answered and answered and answered. There’s only a few days left of the campaign, but I reckon that they’ll still hit the five million dollar mark before their campaign is done. So get talking about your project. The easiest way to do stuff like this is to create your digital footprint. Tweet about it. Blog about it. Facebook page it. Make people aware of it. Give them as much access to the journey as you can so that when you need help, there are people there to give it to you. I reckon about 50% of the backers of With A Little Help From Our Friends were people that I’d met through Twitter since starting up the blog. They knew what was going on. And they were eager to help out when we needed to set up the budget.

Think realistically about how much money you need. Think of the dream about you want. Then settle for somewhere in the middle. Be realistic but not cynical about the amount of money you think you can raise. If I was to do the With A Little Help From Our Friends campaign again, I’ve probably set my target a little higher. That’s not being greedy either – we weren’t asking for much in the first place. But because I wasn’t expecting the support I got (in the end, we raised 132% over our target), we hit the intended amount in the first week. And often once you hit your target, people think that that’s it and the contributions slow down a lot. In a typical campaign, you get most of your contributions in the last twelve hours as everyone comes together to help push you over the line. Rob Thomas of Veronica Mars obviously thought that two million dollars was a stretch (which would be rational thinking!), but looking at it now, if he’d asked for five million, he’d have probably raised that much by now too. Be hopefully realistic about your target limit. 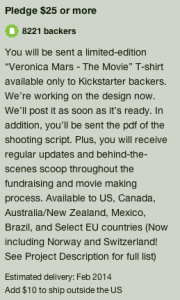 Your perks are the things that are going to seal the deal. Honestly. If your project looks amazing but your perks are expensive and not thought through, people will hesitate. And you don’t want to give your audience a reason to say anything but yes. Think about the logical steps of money. $2, $10, $25, $50, $100, $200, $500. Maybe with a few others in between. It’s entirely up to you how you structure your perks. But think about giving people value for their money. Research other campaigns that have been successful. Veronica Mars is a great example. $25 for an exclusive t-shirt, exclusive pdf of the shooting script, regular updates and insights into what goes on on set. That’s a banging deal for $25 – especially if you’re a fan. $25 is often the most popular amount contributed to a campaign, so make it count. I remember a friend of mine once said that he’s happy to give $25 to a campaign as it’s like buying a DVD. This is a great point – if you haven’t got DVDs or t-shirts or tangible products until the backers start to hit $100, that’s a REALLY expensive piece of merchandise.

With A Little Help From Our Friends – Crowdfunding Campaign from Alli Parker on Vimeo.
That’s what this is, after all. A pitch video. Keep it brief and to the point – unless you have super cool awesome imagery like The Underwater Realm or The Fitzroy. But if it’s talking heads, get across your tone, story, what you need the money for and yourself. After all, you’re asking people to give you money to trust that you’ll deliver them a product. You need them to buy into you and your project – very literally. There’s loads of space to explain more in writing and I’d really really encourage video updates throughout the campaign as it really helps build a sense of personality and excitement around the project. And by leaving them wanting to know more, they’re more likely to read what the rest of the campaign is about.
5. Do your research.
I really think that this is the key to running a strong campaign. Do your research before you start. There are loads of crowdfunding sites now – which is best for you? Kickstarter? Pozible? Indiegogo? Look into territories – Kickstarter is very US based, Indiegogo is UK based, Pozible is Australia but some support multiple currencies. Look into the wildly popular campaigns that have raised loads of money – what about them worked? Look into ones that haven’t worked and, sadly, failed – why didn’t they reach their target? What is unique about your project that you can offer?
I think that crowd-funding is going to become a much bigger player in independent creative projects. It already has done in the few years since it’s been around. With more projects out there competing against each other for attention, you really need to look at how you can make your work stand out. But it’s not impossible to raise money this way – in fact, I think it’s getting easier as crowdfunding becomes more prominent in the world.
You’ve just got to be smart about the way you go about it.
(I wrote a similar post to this as the With A Little Help From Our Friends campaign came to an end here.)