18th April 20139th June 2015
It’s with intense pride, relief and joy that I’m happy to announce that the With A Little Help From Our Friends DVDs have been posted (and hopefully most arrived by now)!

They were posted out last week and I’ve had some people telling me that they’ve shown up on their doorsteps, which is really wonderful to hear. It was a bit of a process putting the DVDs together – designing the covers, printing, trimming, fitting the sleeve; designing the DVD menu; burning each DVD individually and trying to work out what design to put on the DVD itself. In the end, I was inspired by my sister who joked I should draw stick figures on them, which made me realise that I’d saved the figurines from the Indiegogo campaign pitch video.

Once they were all packaged up at ready to go, I had to work out the best way to distribute the 40 DVDs around the world. I figured out that to send all the UK parcels individually to the UK would be the same price as sending them in one hit to Craig to post out again, so I decided to post them all from Australia. Some needed scripts, some were solely DVDs, all were hand addressed and packaged with lots of love and care by yours truly. 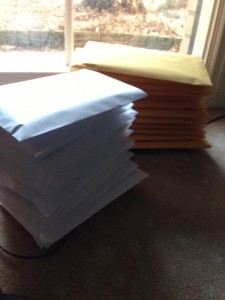 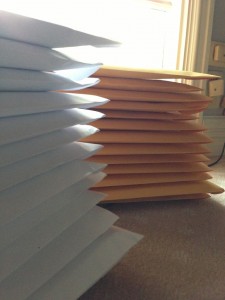 With several bags packed full of these, I trundled down to the post office to send them out. And ten minutes after I arrived, they were gone! Off to all corners of the world – from Moonee Ponds to Maidenhead, from Denver to Pontypridd.
It’s a strange feeling, having done everything now. The film is officially finished. The perks have all been sent out. I’ve had some wonderful emails, tweets and phone calls congratulating me on the film – some even with favourite quotes included, which does wonders for your self esteem as a writer and your appreciation of your wonderful actors who can deliver a line (Markus, Danny, Carolina and Victoria, I’m looking at you!).
So now, as ever, the next step. The next step in this case is to have a look into festivals that might be options to enter the film into. This is alongside writing other scripts and also toying with the idea of the next short film, one that I want to be bigger, better and stronger than With A Little Help From Our Friends. But right now, I’m going to focus on writing my comedy feature film and co-writing my television sitcom pilot and continuing to blog about random things that occur to me along the way.
Thanks for being a part of the With A Little Help From Our Friends journey. I can’t quite believe it’s over, but it’s been absolutely incredible!
Alli x