Sorry for the delay between posts – I’ve only been able to grab snippets at the computer for the last fortnight. Where we we?

Oh, the choir practising Christmas Carols or suchlike out in the back studio when we were gearing up to shoot exteriors.

Jamie, Jim and I went to have a look at the set to figure out how we could shoot it. It was pretty easy to see how it had to be done for the closer shots, so we decided to shoot a wide shot where sound was irrelevant whilst the songs were thudding nearby. After a quick two takes of that for coverage, we pushed in for the closer shots.

Incredibly, the choir took a break when we first started to roll camera. Instead we had to deal with planes, buses, sirens, motorbikes, trucks – anything that is a vehicle that makes a grumbling noise to ruin our sound we got. And when the traffic was quiet, the choir started up again. Craig decided that as we were only going to be about 30 minutes shooting, he’d ask them to take a break until then.

He must be one persuasive guy, cause it worked. We managed to shoot the final scene of the film (although not of the day) really quickly thanks to actors who consistently hit their marks, a fantastic crew and Jim’s awesome walking skills for eyelines. After we finished up there, we told the choir to continue and we headed inside to shoot the last few shots for Markus and Danny.

The thing I’ve learnt about shooting in November is that apparentely November 12 isn’t too early to put up Christmas decorations. We had to, very carefully, dismantle the Chrissy decos from the next location and put them all safely away so that we could shoot and not date the film at any particular time of the year – especially as the costumes didn’t match an English Christmas movie (which was suggested, that we change the time of year but I vetoed that idea very quickly).

Another short scene, consisting of three shots. Four takes per shot and bam! The boys, Danny and Markus, were wrapped for the shoot! It wasn’t over for the rest of us, though, and we moved into the theatre to set up for the final scene to film. It was the conversation between the two girls and we were filming it on a stage. The only thing is that the stage looked like a black room if we were punched in too close, so Jamie stuck a wide angle lens on the front of the camera and there were suddenly red seats in the foreground.

This scene was a little tricky to film because there was a lot of movement in Lucy’s blocking. Jamie had to do a lot of nifty pull focusing throughout each shot to make sure it all came together well and we did cover the scene quite thoroughly to make sure that we got everything that we needed. In amongst church bells ringing on a Sunday afternoon and car alarms going off – both things we couldn’t have predicted but it just goes to show you that location recces at the time you’re planning to shoot are really important! – we managed to finish shooting the scene. Both the girls were great – barely any giggles and they took on board my direction really well.

Then it was all over and we were packing up to get out of there!

It’s a bit crazy looking back to think that we shot a whole short film in two days. It was a fantastic experience for me and hopefully for the rest of the cast and crew as well. We’re in our first week of post at the moment, so I’m hoping that the editor will have something to show me soon but I’ll let you guys know how we’re getting on, of course! 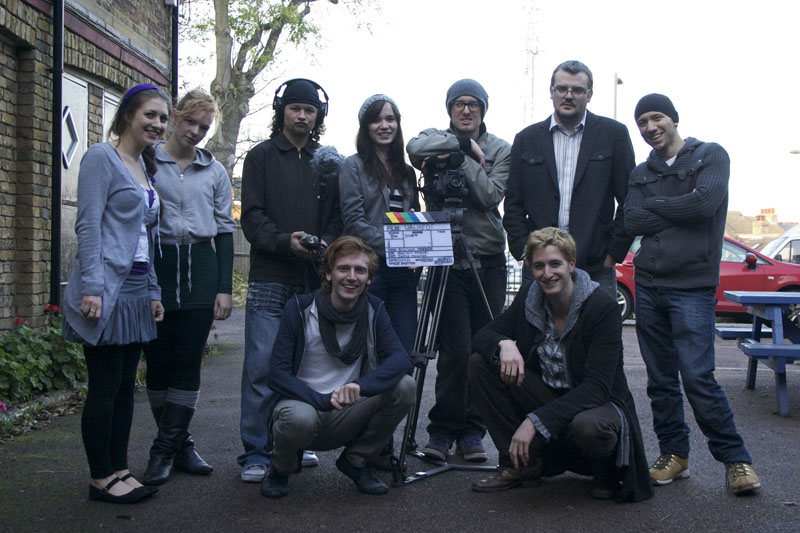 So it’s two days after we’ve wrapped and the dust has settled and all the cast and crew have headed back into normality. The shoot went really well, regardless of problems that cropped up here and there and we got everything we needed to shoot shot, so that’s always a good thing.

I am still trying to collect myself afterward (jumping straight back into work the day after the shoot is a cool reminder of the fact you should always give yourself a day to sleep!), but the next few posts will be a break down of how the shoot went, so keep an eye out for them this week.

The indiegogo campaign is still running for another week and a half and now’s the time when we have to start paying for everything. There’s still time to get on board, just check out the campaign and contribute!

For now, I’m going to leave you with an EXCLUSIVE behind the scenes shot – the cast and crew of With A Little Help From Our Friends (click the image to make it bigger).